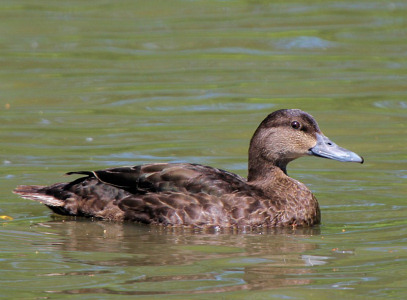 Appearance:
Male - The American Black Duck's plumage resembles the female Mallard but is slightly darker. The body is dark brown while the head and neck is a lighter brown, a dark stripe through the dark eye, a yellow beak, the speculum is iridescent violet-blue with black margins, whitish underwings, and orange-red legs and feet.
Female - The female is very similar to the male but has a dull green beak and olive coloured legs and feet.
Eclipse - The male in eclipse plumage has a darker streaked head and neck.

Notes: - The American Black Duck is a large dabbling duck of eastern North America. They are similar to the Mallard which is a close relative, and which they interbreed with regularly. This was the most abundant duck in eastern North America but has declined since the 1950s due to habitat loss, hunting, and hybridisation.