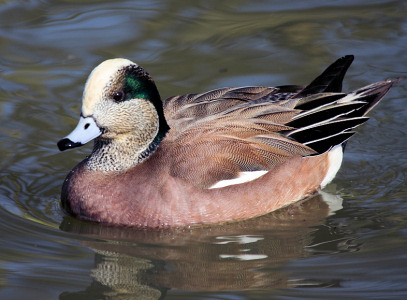 Appearance:
Male - The male American Wigeon has a cream coloured crown and forehead, wide iridescent-green stripe running from the eye down the nape, the front face and throat are a black spotted creamy-white, blue-grey beak with black tip and black around the base, breast, flanks, and back are a pinkish-brown, white belly and undersides, and black under-tail. Both sexes have grey legs and feet.
Female - The female has mainly a grey-brown plumage, pale-blue beak with black tip, and white belly.
Eclipse - Similar to the female but has a rich chestnut brown plumage.

Notes: - The American Wigeon is a medium-sized dabbling duck. It is sometimes called a Baldpate due to its white crown making it look bald. American Wigeons are a noisy duck.