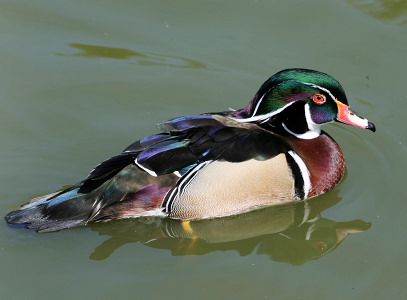 Appearance:
Male - The male American Wood Duck has a long green/blue metalic crest. A white line extends from the beak, over the eye, and along the crest. There are also white markings along the base of the crest and the front of the throat. A red/brown breast, dark green/blue back and wings, white belly, red beak with black central stripe and tip with yellow at the base, and red eyes.
Female - The female is much less colourful with a greyish brown plumage, dark-brown eyes, narrow yellow eye-ring with large white patch and stripe around the eye, whitish throat, and grey beak.
Eclipse - The male in eclipse plumage is similar to the female but has more white around the chin and lacks the female's white patch/stripe around the eye. The male can also be identified by having a red eye and reddish beak.

Notes: - The American Wood Duck or Carolina Duck is a medium sized perching duck. There was a serious decline of Wood ducks in the 19th century due to hunting for both meat and plumage. During the 20th century numbers rapidly increased due to protection and development of artificial nesting boxes. This duck nests in tree hollows and has sharp claws to help it grip when perching.