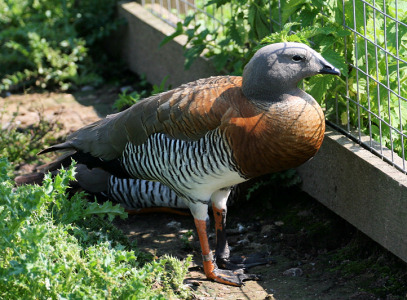 Appearance: - The stocky Ashy-headed Goose has a grey head and upper neck, paler crown, white eye-ring, dark brown eyes, short black beak, chestnut lower neck and breast, grey back, black-barred white flanks, white abdomen, black tail and rump, primary wing feathers are black, secondaries are white and speculum is metallic green, and legs are black and orange. The female is similar but may have more barring on the underparts.

Notes: - The Ashy-headed Goose is a large Sheldgoose of the subfamily Tadorninae which usually graze on land in boggy meadows during the day, and can be seen at night roosting in trees. It occasionally nests in dead hollow trees.