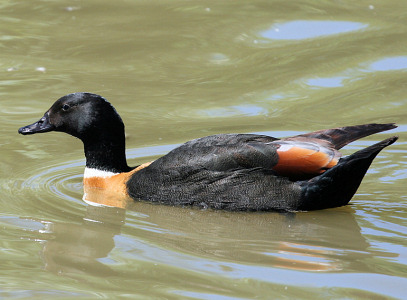 Appearance:
Male - The male Australian Shelduck has a black head and upper neck with metallic green highlights, a white neck collar, black-grey beak, chestnut breast, mainly blackish body, the wings have black primaries, metallic green secondaries, and chestnut tertials.
Female - The female is similar but has white around the eye and the base of the beak. The female is also noticably smaller.