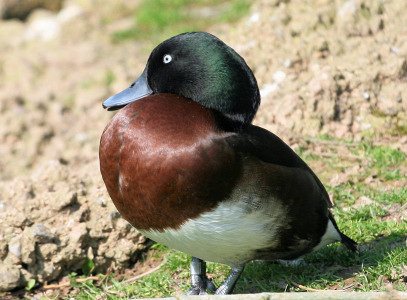 Appearance:
Male - The male Baer's Pochard has a glossy greenish-black head and neck, blue-grey beak with black tip, white eyes, rich chestnut-brown breast, upperparts are blackish-brown, wings and tail are dark brown, a white vent, speculum is white tipped with black, the belly is white, the fore-flank is whitish with the rest of the flank being light-brown, and greyish legs and feet.
Female - The female is similar but slightly duller, less rufous, and the eyes are dark brown.
Eclipse - The male in eclipse plumage is very similar to the female but has a darker head and retains the white eyes.

Notes: - The Baer's Pochard is an east-Asian diving duck. There has been a rapid decline in numbers of this duck in the last ten years and it has recently been classed as 'Endangered'. Reasons for the decline include on-going hunting, and habitat loss due to wetland drainage.