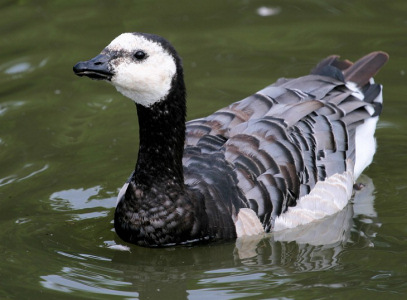 Appearance: - The Barnacle Goose has a creamy-white face with a black streak from the beak to the eye, and glossy black crown, neck, and breast. The back and wings are dark silver-grey, with black and white bars, with paler grey-white underparts, and white belly. The small delicate beak is black. Both sexes are alike.

Notes: - The Barnacle Goose belongs to the Branta genus (Black Geese) and came by its name because it used to be a widely held belief that in the Summer it developed underwater in the form of barnacles. It was later revealed that these geese actually disappeared in the Summer because they were breeding in the Arctic regions. If a barnacle is broken open then it shows a distinct resemblance to a goose.