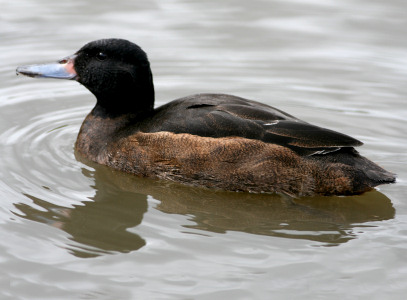 Appearance:
Male - The male Black-headed Duck has a black head and upper neck, dark-brown eyes, bluish-grey beak with black dorsal stripe and tip, red around the base of the beak during breeding season, dark-brown upperparts and tail, lighter-brown underparts, brown wings, and legs and feet are grey.
Female - The female is similar except has a brown head and neck with a dark-brown crown, whitish chin and stripe running through the eye.

Notes: - The Black-headed Duck is also called the Cuckoo Duck as it will lay its eggs in the nests of other birds such as the Rosy-billed Pochard or other duck,and also the nests of gulls or birds of prey. When the ducklings hatch they are completely independant after only a few hours and are able to fend for themselves. The Black-headed Duck is the only member of the genus Heteronetta but is allied to the Stiff-tail ducks of the subfamily Oxyurinae. These ducks are abundant and classified as Least Concern by the IUCN.