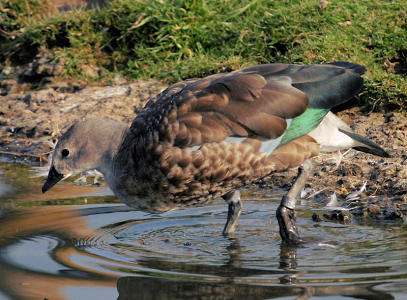 Appearance: - The Blue-winged Goose is a stocky grey-brown mottled bird, paler on the head and neck, a black beak, dark brown eyes, a pale blue forewing which is distinctive when in flight, primary wing feathers are black and secondaries are glossy green, a black tail, the undertail and vent is white, and the legs and feet are black. Both sexes are alike but the male is usually slightly larger.

Notes: - The Blue-winged Goose or Abyssinian Blue-winged Goose is only found in the highlands of Ethiopia. It can swim and fly well but rarely does either, it much prefers to graze near to the water. It is a relatively quiet goose and largely nocturnal - it builds its nest and grazes at night. Numbers have declined due to habitat loss as the human population increases and it is now listed as 'Vulnerable'.