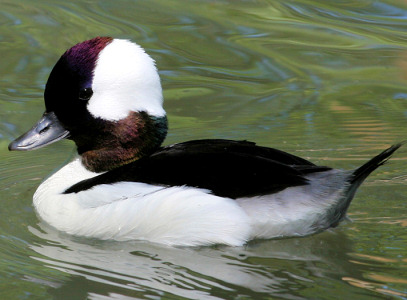 Appearance:
Male - The male Bufflehead has a black head and upper neck with shades of blue, green and violet, bluish-grey beak, eyes are dark-brown, a large patch of white extend from behind the eye to the back of the head which forms a crest, upperparts are black, lower neck and underparts are white, and the legs and feet are pink.
Female - The female has a dark-brown head with a white patch behind and below the eye, blackish-brown upperparts, greyish-white underparts, dark-grey beak, dark-brown eyes, and legs and feet are greyish.
Eclipse - The male in eclipse plumage is similar to the female but has a larger white patch on its face and retains its wing pattern.

Notes: - The Bufflehead is a small American sea duck. It gets its name because when the male puffs out his head feathers it resembles a Buffalo head. The Bufflehead nests in tree cavities particularly holes made by Northern Flickers (American woodpeckers).