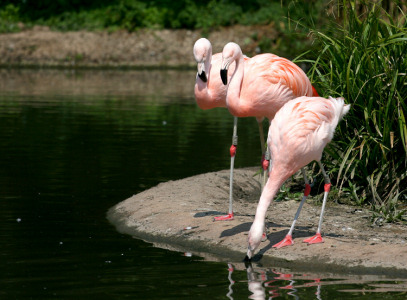 Appearance: - The large Chilean Flamingo has a pink plumage with black primary, and black secondary flight feathers, with red wing coverts. They can be distinguished from other species of Flamingo because of their long greyish legs with pink leg-joints and pink webbed feet. Also, more than half of their large pink beak is black. The eyes are a pale yellow colour. Both sexes are alike but the male is slightly larger.

Notes: - The large Chilean Flamingo is closely related to the American Flamingo and the Greater Flamingo. This species is classified as 'near-threatened' due to hunting, egg harvesting, and loss of habitat. The Flamingos characteristic pink colouring is caused by the beta carotene in their diet.