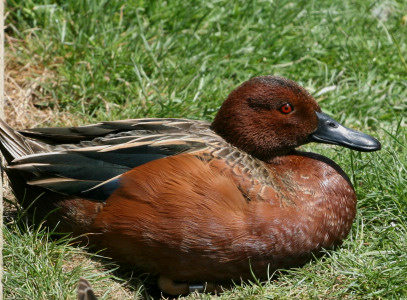 Appearance:
Male - The male Cinnamon Teal has a mainly cinnamon-red body and head, dark brown back with light brown fringes, red eyes, blackish beak, upper wing coverts are blue with a metallic green speculum bordered with white in front and buff behind, dark rump, and tail, and legs and feet are yellow-orange.
Female - The female is similar to the female Blue-Winged-Teal but has an overall richer colour, a mottled brown body, pale brown head, white patches around the eye and base of the beak, brown eyes, grey beak, and legs and feet are a dull yellow.
Eclipse - The male in eclipse plumage is similar to the female but has a slight overall reddish plumage and retains the wing pattern. It also differs from the female by having red eyes, and a dark beak.