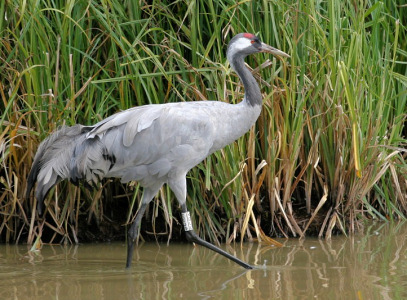 Appearance: - The Common Crane is a medium sized crane with a red patch on its crown, dark grey-black neck and face with a long white facial-streak, light-grey body, and a bunch of black wing plumes. Both sexes are alike.

Notes: - The Common Crane is a large graceful wading bird which makes a loud trumpeting call. These birds can be seen performing their dancing displays in large flocks which involves opening their wings and leaping up in the air.