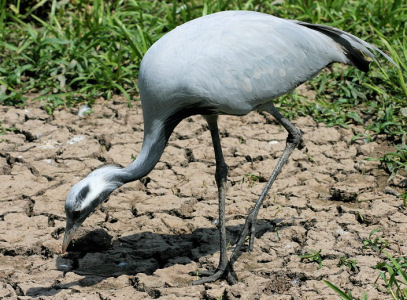 Appearance: - The Demoiselle Crane is the smallest of all Crane species, has a light bluish-grey body, the head and neck are black with a light grey stripe that extends from the beak to the nape, and a white feather plume from behind the eye running down the neck. The black feathers on the front lower neck hang down below the breast. The eyes are orange-red, and legs are black. Both sexes are alike.

Notes: - The Demoiselle Crane was given its name by the French Queen, Marie Antoinette, as she was enchanted by the Crane's delicate and maidenly appearance. Demoiselle means maiden or young lady in French. Like other Cranes it also performs a dancing display but is more balletic with less jumping than the Common Crane. It has a loud trumpeting call which is higher-pitched than the Common Crane.