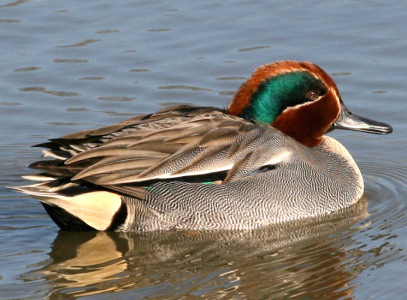 Appearance:
Male - The male Eurasian Teal has a bright chestnut head and neck, a wide metallic dark green stripe running from the front of the eye to the neck which is bordered with white, the white border extends to the base of the beak, the flanks and mantle are vermiculated with pale grey and black, metallic green speculum bordered by white, upper breast is pale cream with dark spots, underparts are white with slight barring on abdomen and vent, dark-grey beak, and legs and feet are grey. The Green-winged Teal is very similar to the Common (Eurasian) Teal but differs by having a vertical white stripe on the side of the breast, and a much less defined white border around the green stripe on the face.
Female - The female has a sandy brown plumage streaked with dark brown.
Eclipse - The male in eclipse plumage is similar to the female but is more uniform in colour and with a dark head and vestigial facial markings.

Notes: - The Eurasian or Common Teal is the smallest European dabbling duck. It looks very similar to the North American Green-winged Teal and it has yet to be decided whether to treat them both as one species or class them as two separate species.