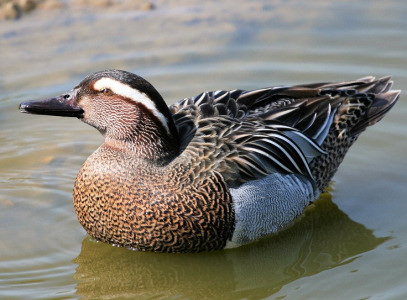 Appearance:
Male - The male Garganey has a brown head and breast, a distinctive broad white stripe or crescent over the brown eye, upperparts are dark brown with pale feather edges, loose black and white scapulars covering the green speculum, light greyish flanks and belly, and grey beak and legs.
Female - The female is brownish with a dark crown and dark eye-stripe. The female Garganey is similar to the female Teal but has a white throat and is paler.
Eclipse - The male in Eclipse plumage is similar to the female but has a more reddish-brown plumage, and the wings retain the breeding colouration.

Notes: - The Garganey is a small dabbling duck. It is highly migratory, breeding throughout Europe and central Asia and then flying south to Africa and Australasia during the winter.