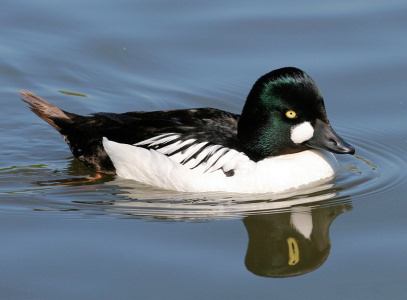 Appearance:
Male - The male Goldeneye has a metallic green-black head with a large round white spot on the cheek, golden-yellow eyes, a black beak, a white neck and belly, dark back, black tail, rump and vent area, visable elongated black and white scapulars and orange-yellow legs and feet.
Female - The female has a dark chocolate-brown head and neck, black beak with sometimes a yellowish tip, pale yellow or whitish eyes, brown-grey body with whitish breast and underparts.
Eclipse - The male in eclipse plumage looks very much like the female but retains its wing pattern and has golden-yellow eyes while the female's are pale yellow or whitish.

Notes: - The Goldeneye is a northern hemisphere sea duck. They nest in tree cavities and will also use nestboxes which has helped to increase the population.