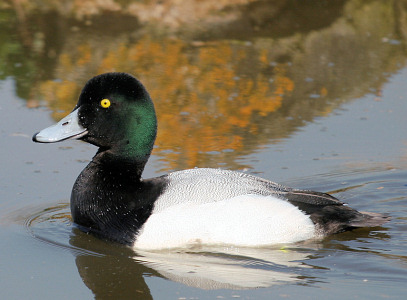 Appearance:
Male - The male Greater Scaup has a black head with a green glossy sheen, a black neck, breast, rump, and tail, yellow eyes and blue-grey beak with black tip, the belly and flanks are white, upperparts are pale grey with black vermiculation, and legs and feet are greyish-blue.
Female - The female has a brown head and body with a white band at the base of the beak, yellow eyes, darker beak than the male, and sometimes a whitish spot on side of the head.
Eclipse - The male in eclipse plumage is much duller than in its breeding plumage with a brownish-black head and neck and a brownish tinge to the rest of the plumage.

Notes: - The Greater Scaup is a small diving duck, colloquially called the Bluebill. Unlike the smaller but very similiar Lesser Scaup, this duck is found across Eurasia as well as North America.