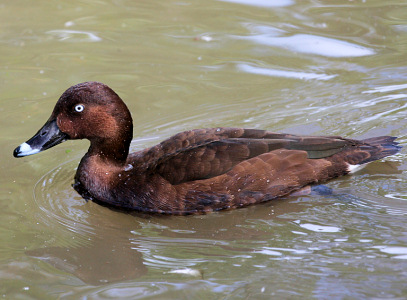 Appearance:
Male - The male Hardhead has a uniform chocolate-brown plumage above, with white undersides and white undertail. The underwings are white edged with brown. The male has striking white eyes and the beak is blackish with a blue-white bar across the tip.
Female - The female is similar but has brown eyes and has a paler brown plumage.

Notes: - The Hardhead is the only true diving duck in Australia and is sometimes called the white-eyed Duck due to the male's striking white eyes.