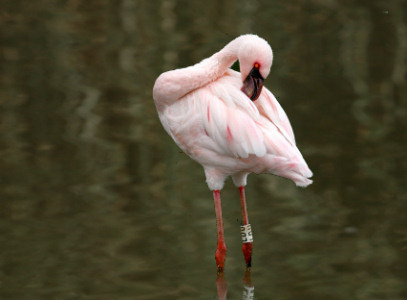 Appearance: - The Lesser Flamingo is the smallest species of Flamingo. It has a pinkish-white plumage, long neck, dark red beak with black tip, deep yellow-orange eyes surrounded by a reddish-brown ring and dark bare skin, black primary and secondary flight feathers, red coverts, and long pink legs and webbed feet. They also have a hind toe known as a hallux. Both sexes are alike but the male is slightly larger.

Notes: - The Lesser Flamingo is the smallest and most numerous of the six species of Flamingo but is still classified as 'near-threatened' due to the low number of breeding sites, which are threatened by human activities. The Flamingos characteristic pink colouring is caused by the beta carotene in their diet.