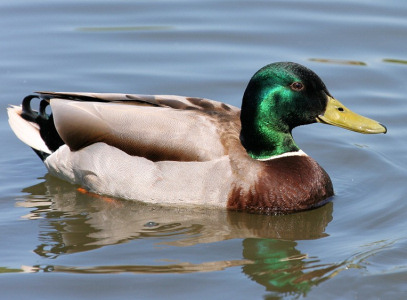 Appearance:
Male - The male Mallard has a metallic green head and neck with a narrow white ring on the lower neck, a reddish-brown breast, brown/grey back, and pale grey abdomen and flanks. The rump and tail coverts are black, the centre of the tail is black and curled upwards and the sides of the tail are white. The speculum is blue-purple bordered by black and then white feathers. The beak is yellow or olive-green, and legs and feet are orange.
Female - The female Mallard is a mottled brown colour with the purple, black, and white bar on the wings. The female also has a pale eyebrow with dark stripe through the eye, a dark crown and hindneck, and olive-brown beak.
Eclipse - The male in eclipse plumage is similar to the female but has a darker crown and nape, and a redder breast.

Notes: - The Mallard is the most common
wild duck and is widespread in the northern hemisphere. The Mallard, a dabbling duck, is the ancestor of almost all of the varieties of domestic ducks. Mallards frequently interbreed with their closest relatives leading to various hybrid ducks.