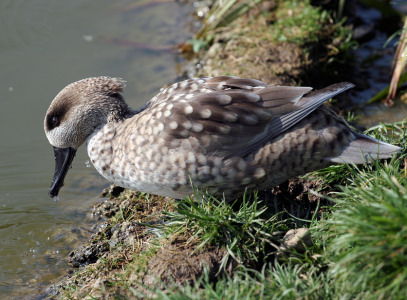 Appearance: - The Marbled Teal has a creamy-white and sandy-brown coloured plumage with brown markings giving a marbled effect, dark eye-patch which can extend to the nape, slight crested appearance, blackish beak. The legs and feet are greeny-brown or dull yellow. Both sexes are similar.

Notes: - The Marbled Teal used to be classified as a dabbling duck but is now classed as a diving duck. This duck is regarded as vulnerable after a major reduction in population during the 20th century caused by loss of habitat and hunting.