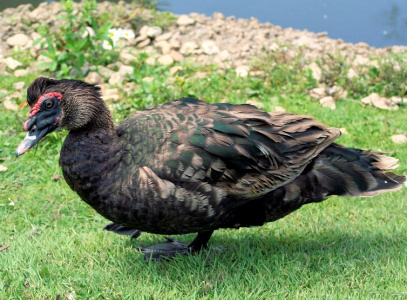 Appearance: - The wild Muscovy Duck has a mainly black plumage which has a greenish or purple sheen, the upperwing and underwing coverts are white, forehead feathers are long forming a crest, distinctive bare black-and red or all-red face with a pink beak which has a large knob at its base, yellow-brown eyes, long claws on the feet, and legs and feet are greyish-black. The female is similar but is much smaller, and lacks the knob at the base of the beak. The domesticated Muscovy Duck also looks similar but has variously coloured plumages.

Notes: - The wild Muscovy Duck is a large perching duck native to Mexico, Central, and South America. This is a non-migratory species which likes to roost in trees. The Muscovy Duck was first domesticated in South America in the early 16th century and Domestic Muscovy Ducks (sometimes called Barbary Ducks) are now common and have more colour variation, are heavier, and less able to fly long distances than the wild Muscovy Duck.