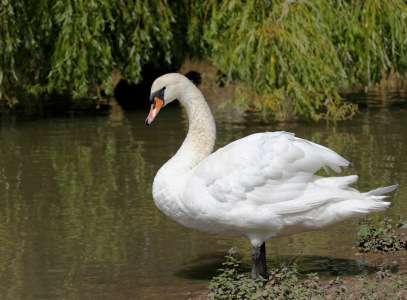 Appearance: - The Mute Swan is one of the largest and heaviest flying birds. They are all white with a slight yellow-orange tinge on top of the head, orange-red beak which has a black tip, the legs and feet are black, and they have a distinctive black knob above the beak which is much larger on the male (Cob) than the slightly smaller female (Pen). The cygnets are grey-brown with grey legs and beak.

Notes: - The Mute Swan is the largest species of Swan and also the least vocal which is how it came by its name. However, you can hear a distinctive throbbing sound from its powerful wings during flight which is unique to its species and can be heard from up to a mile away.