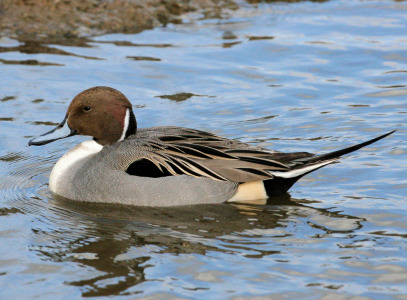 Appearance:
Male - The male Northern Pintail has a chocolate-brown head, throat and hind-neck, white on the breast which extends up along side of neck, white belly, greyish flanks and uppersides with elongated grey feathers with black central stripes on back, a long pointed black tail, silver-blue beak with black stripe, and blue-grey legs.
Female - The female is a mottled brown with a grey-brown head, shorter tail but the same distinctive long beak which is duller in colour.
Eclipse - The male in eclipse plumage is similar to the female but has elongated grey tertial feathers, retains its wing pattern, and the beak remains a bright silver-blue with black stripe down the middle.

Notes: - The Northern Pintail is one of the most common ducks in the northern hemisphere. This large dabbling duck has a long neck which allows them to reach further into deep water for their food when up-ending. It usually feeds in the evening or night and spends much of the day resting.