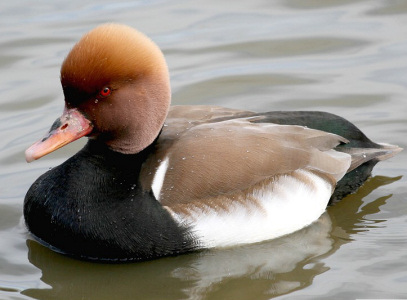 Appearance:
Male - The male Red-crested Pochard has a rounded orange head, black breast, grey-brown back, white flanks, and black tail. The male also has a bright red beak, red eyes, and red-orange legs and feet.
Female - The female has a dark brown crown and nape with white cheeks, brownish eyes, upperparts are brown with underparts being lighter brown. The beak is dark grey-brown with pinkish tip, and the legs and feet are grey-pink.
Eclipse - The male in eclipse plumage is very similar to the female but retains the red eyes and bright red beak.

Notes: - The Red-crested Pochard is a typical diving duck which likes deep well-vegetated lakes. During courtship the male will dive for food which is offered to the female.