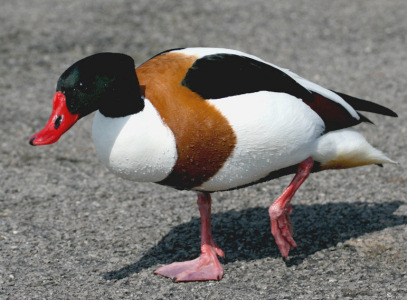 Appearance: - The male Common Shelduck has a dark glossy green head and neck. The lower neck and upper breast are white with a chestnut brown band around the breast and mantle, a white back, the underside is mostly white and the wings have black primary and secondary feathers with white forewings. The beak is red with a conspicuous knob on the upper base, and the legs are pink. The female is similar but is smaller, duller, a narrow chestnut band around the breast, and does not have the knob on its beak.

Notes: - Shelducks are very large ducks which spend more time out of water than most other ducks. In July the UK population moulting flocks migrate to north-west Germany leaving the juveniles behind with a few adult birds to look after them.