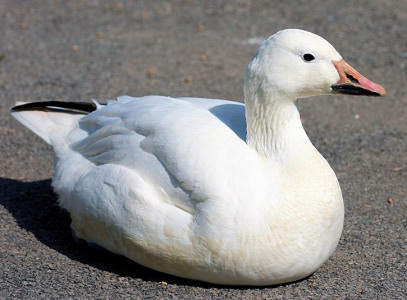 Appearance: - The Snow Goose or Blue Goose, as it is also called, has two distinct colour morphs which is either white (snows) or grey-blue (blues). The white-morph geese are all-white with black wing-tips, while the blue-morph geese have a bluish-grey plumage with a white head, neck and tail tip. Both geese have a pink beak, and reddish-pink legs and feet. Both sexes are alike.

Notes: - The Snow Goose belongs to the Chen genus (White Geese) and is divided into two sub-species: the Lesser Snow Goose and the larger Greater Snow Goose. The population has increased dramatically since the 1970's, and the breeding population of the Snow Goose exceeds 5 million birds. These Geese often nest in very large colonies.