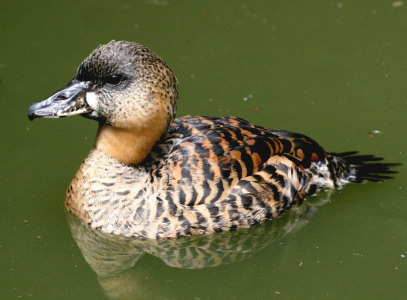 Appearance: - The White-backed Duck has a speckled dark blackish-brown crown and hind neck which also extends down to the dark-brown eye, buff foreneck and sides and cheeks are buff speckled with brown, a white patch at the base of the black hooked beak with yellow blotches, a buff breast with barring, underparts are also buff with barring and upperparts and flanks are buff with broader black barring, the lower back is white but this can't be seen with folded wings, a black rump and tail, pale brown flight feathers, Wing coverts are dark brown with buff and white markings, and legs and feet are greenish-grey. Both sexes are alike.