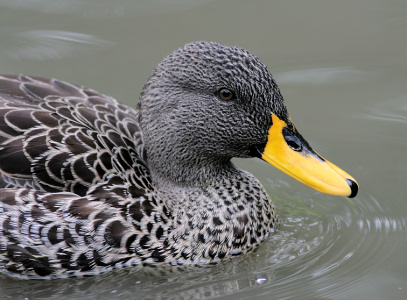 Appearance: - The Yellow-billed Duck has a streaked black-grey head and neck, bright-yellow beak with black markings on the top and tip of the beak, the body has white-tipped brown feathers giving it a scaly appearance, a darker brown back, and the wings are white below with a white-bordered green speculum above. Eyes are brown and legs are olive coloured. Both sexes are alike.

Notes: - The Yellow-billed Duck is a dabbling duck which is an abundant resident to south Africa. It is not migratory but will search for suitable waters in the dry season. The female builds the nest, incubates the eggs and raises the young.