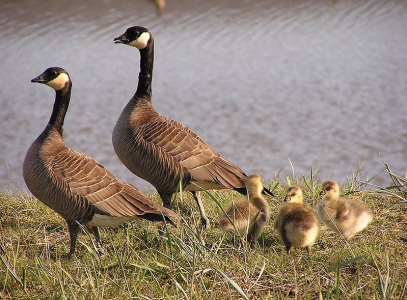 Appearance: - The Cackling Goose is very similar in appearance to the Canada Goose and it can be very hard to tell the two apart. Generally the Cackling Goose is smaller although the various sub-species do vary in size, the beak appears to be more stubby, the neck is slightly shorter, and their call is higher pitched. It has a black head and neck with a white chinstrap, light-brown breast, sometimes a white neck-ring, a grey-brown back, underparts from belly to tail are whitish, and the stubby beak and legs are black. Both sexes are alike with the male usually slightly larger.

Habitat/Range: - Tundra, streams, coastal marshes, floodplains, and will graze in agricultural fields in winter. Native to North America, it breeds in Canada and Alaska (further north than the Canada Goose), and the Aleutian Islands, and winters further south, mainly in western USA, northern Mexico, and occasionally in eastern China, Japan, and eastern Siberia. 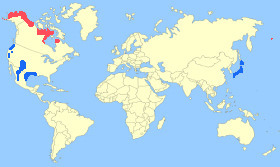