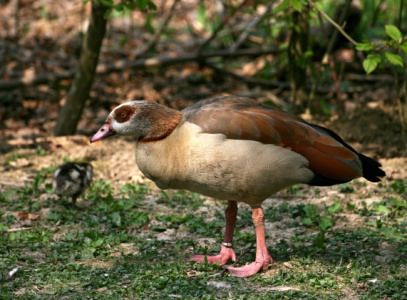 Appearance: - There is a lot of colour variation between individual Egyptian Geese. The head and neck is pale grey with sides and crown being mottled brown, a reddish-brown ring around the lower neck, and large dark eye patch, pink beak, upperparts are reddish-brown with fine black vermiculations, scapulars are dusty brown, rump and tail are black, undertail is cinnamon coloured, wing coverts are white with a black line, primary wing feathers are black, the secondaries are metallic green, and legs and feet are pink. Both sexes are alike but the male is usually larger.

Habitat/Range: - Wetlands, lakes , marshes, and rivers in Africa, south of the Sahara, and in the Nile Valley. Also introduced into East Anglia in the UK and the Netherlands. 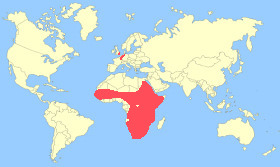 Notes: - The Egyptian Goose is actually a member of the Shelduck subfamily (Tadorninae). This goose was considered sacred by the ancient Egyptians and featured in much of their artwork.