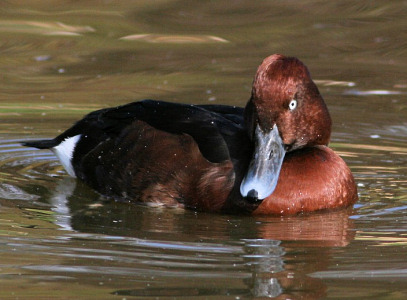 Appearance:
Male - The male Ferruginous Duck has a rich chestnut head, neck, and breast, grey beak and striking white eyes, a dark collar around the base of the neck, upperparts are dark-brown, speculum is white, flanks are reddish-brown, a white belly and white under the tail coverts and legs and feet are grey.
Female - The female is duller and browner with brown eyes, and like the male it has white undertail coverts.
Eclipse - The Male in eclipse plumage is similar to the female but has a redder head and breast. It also differs from the female in having striking white eyes. 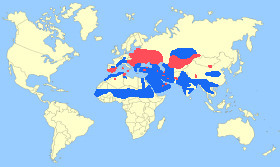 Notes: - The Ferruginous Duck is a medium-sized Eurasian diving duck known colloquially as the Fudge Duck. The name 'Ferruginous' means rust coloured. It has also been called the White-eyed Pochard.