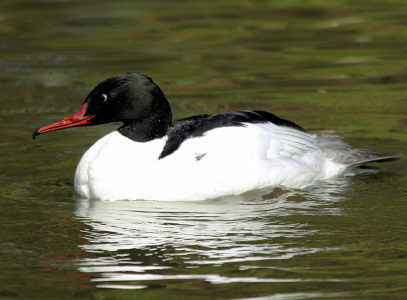 Appearance:
Male - The male Common Merganser has a black-greenish gloss head and neck, the long neck feathers make the head look larger, a white body with pink tinge, the back is glossy black with a grey tail, the wings largely white on the inner half and black on the outer half, a red thin but long hooked beak with red-orange legs and feet.
Female - The female has a chestnut brown head, neck, and crest, with white upper chin, and upper-breast, upperparts are greyish-blue, underparts are creamy-white, with grey flanks.
Eclipse - The male in eclipse plumage is similar to the female but retains its wing pattern which is visible as a white patch. The head is a deeper brown than the female, the mantle is darker, and the beak is redder.

Habitat/Range: - Lakes, rivers, estuaries and coastal waters in North America - Alaska, Aleutians, and much of Canada, northern & central Europe into Siberia, and western China. Winters in much of the USA, coastal regions of south-east Europe, central Asia, east coast of China, Korea, and Japan. 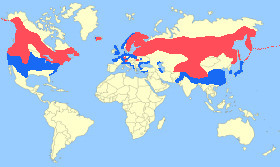 Notes: - The Goosander or Common Merganser is a sea duck. It is an expert at diving for fish such as salmon and trout and has a sawbill to help grip the fish. This bird has become unpopular with anglers due to its efficiency in taking fish.