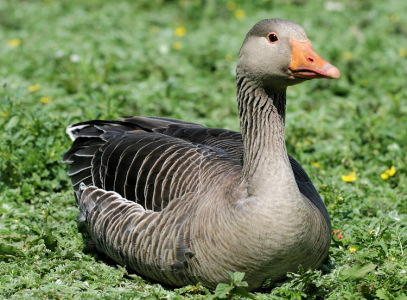 Appearance: - The Greylag Goose has a grey-brown plumage with pale fringes on the feathers. Underparts are light-grey with a white belly. Head and neck are grey-brown, beak is orange or pink, and legs are pinkish. Both sexes are alike.

Habitat/Range: - Wetlands, marshes, and lakes in Iceland, Scotland, Scandinavia, eastern Europe, Russia, south China. Icelandic birds migrate to the UK in the Autumn, and other geese winter in western Europe, North Africa, and the eastern Mediterranean. The eastern race winter in north-west India, Burma, and south China. The Greylag Goose has also been introduced to the south-east and south-west of Australia. 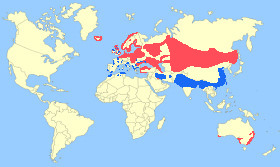 Breeding Season: - From early May in Iceland, earlier in mid-Europe.

Notes: - The Greylag Goose is a member of the Anser genus (Grey Geese). Like many other geese, they migrate south during the winter but the Greylag is always the last to leave, lagging behind the others which is probably how it got its name. There are two distinct races:- the western race extends from Iceland to eastern Russia, and the eastern race which is slightly larger and has a pinker bill. The Greylag is the largest of the grey geese and ancestor of the domestic goose.