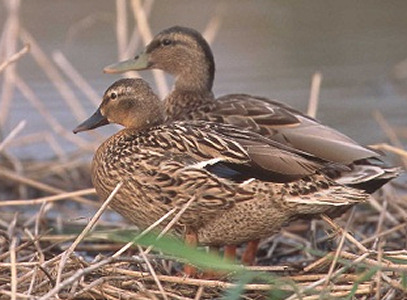 Appearance: - The Hawaiian Duck resembles the female Mallard with a mottled brown plumage, a greenish-blue speculum bordered with white, dark tail, and legs and feet are orange. Both sexes are similar but the larger male has an olive green beak while the female has a dark beak with orange markings.

Breeding Season: - All year round but primarily December to May.

Notes: - The Hawaiian Duck is an Hawaiian dabbling duck. It is listed as 'Endangered' because of its small range, introduced predators, habitat loss, and its interbreeding with introduced feral Mallards.