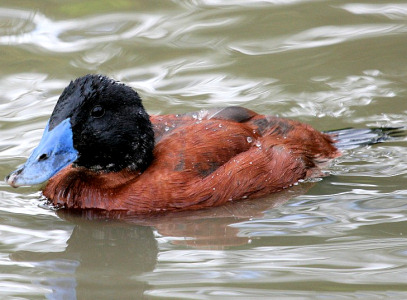 Appearance:
Male - The male Maccoa Duck has a chestnut coloured body, black head, bright blue beak, stiff black tail, upper wings are dark brown and underwings greyish-white, belly and undertail are whitish, eyes are dark brown, and legs and webbed feet are grey.
Female - The female has a grey-brown body, dark brown crown, nape, and cheek-stripe, and a dark grey beak.
Eclipse - The male in eclipse plumage is very similar to the female but has a darker head and face markings.

Food: - They dive for small invertebrates, plants and seeds.

Habitat/Range: - Wetlands, shallow waters, and swamps. They are found in two main areas of Africa - in the east in Ethiopia, Kenya and Tanzania, and also in the south in Zimbabwe, Botswana, Namibia and South Africa. 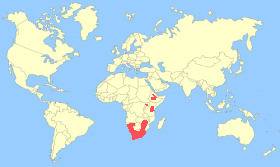 Breeding Season: - From August to January in South Africa.

Notes: - The Maccoa Duck is a small shy African stiff-tail duck which feeds by diving underwater for extended periods. When alarmed they tend to dive underwater rather than take flight as they struggle to take-off and only fly short distances.