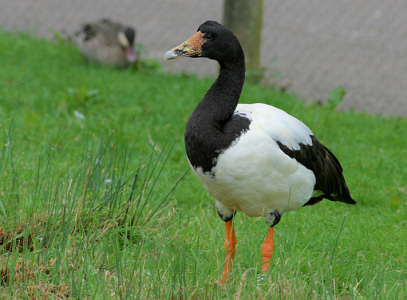 Appearance: - The Magpie Goose has a black and white plumage, a long neck, bare red skin on its face, a red knob above the beak, small orange beak with a hook at the end, and orange-coloured legs and feet which are partially webbed. Both sexes are alike although the female is slightly smaller and has a smaller knob above her beak.

Habitat/Range: - Open wetlands, floodplains, swamps, freshwater lakes, and coastal waters mainly in northern Australia and southern New Guinea. They breed in large colonies during the wet season when water is plentiful, but move on to permanent waters at the end of the wet season, when the young birds are able to fly, in preparation for the dry season. 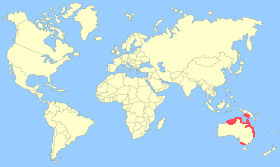 Breeding Season: - February to April in the south, or August to September in the north.

Notes: - The Magpie Goose, or Pied Goose as it is sometimes called, is very distinct from other species of Goose and is a unique member of the order Anseriformes. The male will often have two female mates. The male builds the nest and the females both lay their eggs in the same nest. All three parents will feed their young. These birds do not lose all their feathers at once during moulting so they remain able to fly all year round.