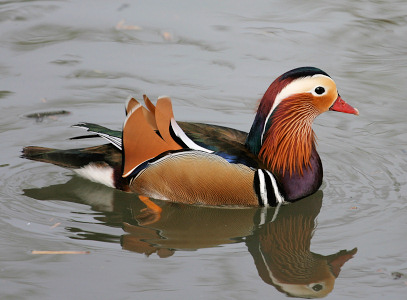 Appearance:
Male - The male Mandarin has a red beak, large white eye-stripe, reddish face and whiskers. A purple breast with two vertical white bars, ruddy flanks, two orange sails at the back, and yellow legs and feet.
Female - The female is grey/brown with a thin white eye-stripe which circles the eye, grey beak, and dark yellow legs.
Eclipse - The male in eclipse plumage is similar to the female but has a reddish bill and visible blue wing feathers. 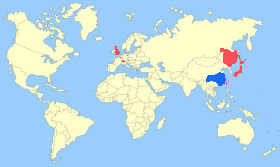 Breeding Season: - April and May in UK.

Notes: - The Mandarin duck is a medium-sized perching duck and is probably one of the most striking and decorative ducks along with its close relative, the American Wood Duck. The name 'Mandarin' was given to this duck because of its brilliantly decorative plumage which resembled the colourful Chinese Mandarin dress. They nest in tree cavities and although the male leaves the female to incubate the eggs he returns to help look after the ducklings.