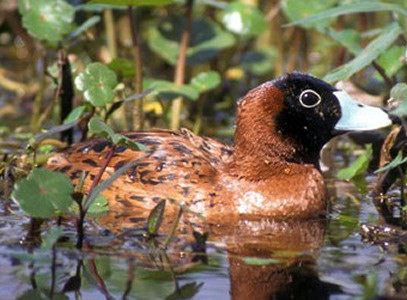 Appearance:
Male - The male Masked Duck has a black face, crown, and throat, the rear of the head is chestnut brown, the eyes are dark-brown with a light coloured eye-ring, the beak is light-blue with a black tip, the body is chestnut brown with black speckling, a black tail, mottled wings, and the legs and feet are blackish.
Female - The female has a whitish-buff face, a dark crown, and a wide dark stripe running through its eye and another wide parallel stripe running from the beak to the nape, and a barred brownish-grey body.
Eclipse - The male in eclipse plumage is very similar to the female but has more white on the wings.

Habitat/Range: - Mangrove swamps, freshwater pools, lakes, and marshes surrounded by heavy tree cover. They are found in tropical parts from Mexico to South America including the Caribbean. They are non-migratory but vagrants have been reported in southern USA including Texas and Florida. 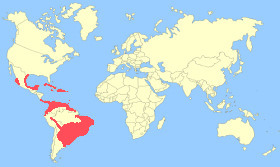 Breeding Season: - Begins November or December in South America and June to October in the Caribbean.

Notes: - The Masked Duck is the only member of the genus Nomonyx and is intermediate to the Stiff-tail ducks and the Black-headed Duck. These are very shy ducks but are also quite numerous and are listed as 'Least Concern' on the IUCN list.