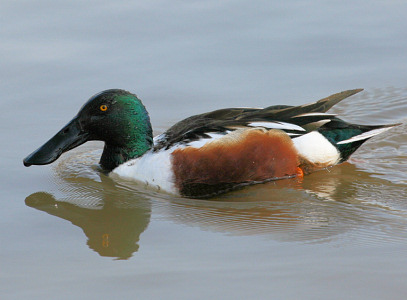 Appearance:
Male - The male Northern Shoveler has a metallic green head, yellow-orange eyes, large black spatula shaped beak, white breast, chestnut undersides and flanks, the rump and upper-tail are black, the sides of the rump are white, pale-blue forewing feathers, green speculum bordered with white, and the legs and feet are orange-red.
Female - The female has the same large spatula shaped beak which is grey-brown, and is mostly mottled-brown and buff with a bluish shoulder patch.
Eclipse - The male in eclipse plumage is similar to the female but has a darker head, reddish flanks, retains the wing colour as well as the yellow eyes and dark beak. 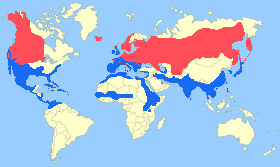 Notes - The Northern Shoveler is a dabbling duck with an extremely large range from North America, Europe to Asia.