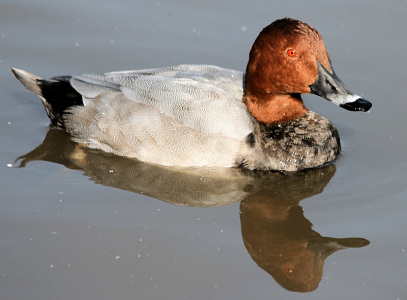 Appearance:
Male - The Male Common Pochard has a dark reddish-brown chestnut head and neck, dark grey beak with central band of light-grey and black tip, red eyes, black breast, rump, vent, and tail, with a light-grey body, and the legs and feet are greyish-yellow. Common Pochards look similar to the Redhead and the Canvasback.
Female - The female has a dull grey-brown plumage which is mottled on the head, neck, breast, and upper-back, a paler face, chin and around the brown eye, the beak is similar to the male but has a more narrow central band of grey, the tail and rump are dark brown, and the belly is white.
Eclipse - The male in eclipse plumage is similar to the female but has a darker grey back, and dark breast and head. It also has a broader central band on the beak compared to the female and retains the red eyes.

Habitat/Range: - Wetlands, marshlands, and fairly deep freshwater lakes in the UK, north Europe and into Asia. They winter in south and west Europe, north Africa, India, southern China, and Japan. 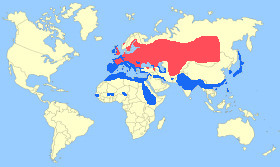 Breeding Season: - Late April and May.

Notes: - The Common Pochard is a medium sized diving duck. Their short legs set back on their body makes walking difficult so they spend most of their time in the water diving for food. When alarmed they prefer to swim away rather than flying off. These birds are widespread and abundant.