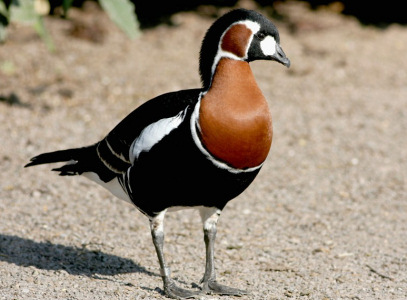 Appearance: - The Red-breasted Goose has dark sooty black upperparts, neck, face, and throat with white patches between the eye & beak, white stripes behind the eye & neck, white band encircling the forebody, and distinctive chestnut-red on cheeks, foreneck, and breast. Tail coverts are white and the tail black. Legs, feet, and beak are grey-black. Both sexes look similar.

Habitat/Range: - Tundra, wooded tundra, and lakes in northern Siberia. Winters around the Caspian Sea in Azerbaijan, Iran & Iraq and the Black Sea in Romania, Bulgaria & Turkey. 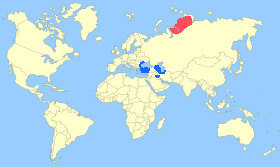 Notes: - The Red-Breasted Goose belongs to the Branta genus (Black Geese). It has declined in numbers over the last few decades. Over 80% of the population roost during the winter at just five sites, with nearby feeding areas threatened by changes in land use. These Geese breed in northern Siberia and often build their nests close to birds of prey such as the Snowy Owl, Peregrine, and Buzzard to keep themselves protected from predators such as the Arctic fox. During the 1950s the high use of pesticides used resulted in the decline of the Peregrine that helped protect these geese during the breeding season.