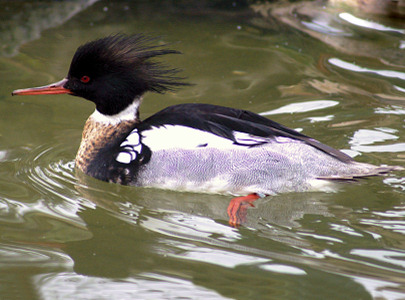 Appearance:
Male - The male Red-breasted Merganser has a dark green head with a long distinctive spiky crest, long thin red serrated beak, red eyes, white neck, finely black spotted rusty coloured breast, undersides are creamy-white, flanks are white with fine black barring, a black back, and legs and feet are red.
Female - The female has a rusty coloured head with a smaller crest, mottled grey-brown body, reddish-brown eyes, slightly less reddish beak and legs than the male.
Eclipse - The male in eclipse plumage is similar to the female but has a darker mantle, and retains its wing pattern which is visible. The beak and legs are also redder than the female. 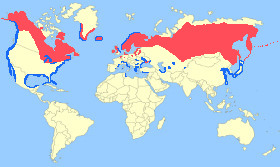 Breeding Season: - End of May to mid-July.

Notes: - The Red-breasted Merganser is a sea duck which is able to dive for fish and stay underwater for some time and uses its sawbill to grip the fish.