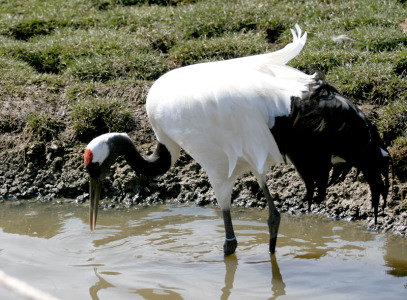 Appearance: - The Red-crowned Crane has a mainly snow white body, a red crown, a black neck, cheeks, throat, and the front of the face, white primary flight feathers, black secondary wing feathers which can be seen while it is standing and can be mistaken for the tail which is actually white, and the legs and feet are grey-black. Both sexes are alike but male is usually slightly larger.

Habitat/Range: - Wetlands, marshes, bogs, rivers, and streams in eastern Russia, and north-eastern China. They winter in Korea, and east-central China on paddy fields, grassy tidal flats, and mudflats. A resident population can also be found in Hokkaido, Japan. 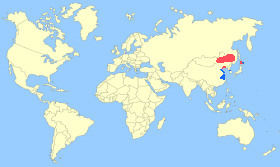 Breeding Season: - April and early May.

Notes: - The Red-crowned Crane is found in Asia, and is also sometimes called the Manchurian Crane or Japanese Crane depending on their location. This is one of the rarest Cranes in the world with a wild population of about 2,750 which includes 1,000 resident birds in Japan. The biggest threat to these birds is habitat loss with a lack of suitable wetlands for nesting. Several hundred Red-crowned Cranes are kept in zoos around the world. Like other Cranes they will dance during the breeding season.