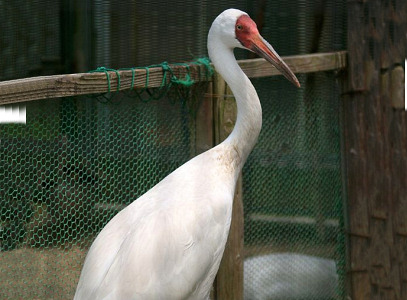 Appearance: - The Siberian Crane has a pure white plumage, the front of the face from behind the yellow eye to the beak is bare red skin, the primary flight feathers and primary coverts are black, and the legs and feet are pinkish. Both sexes are alike but the male is usually slightly larger.

Food: - Mainly aquatic plants, seeds, roots, and berries, and also small rodents, insects, earthworms, and fish. It is the only species of Crane to have a serrated beak which helps it to grip its food. 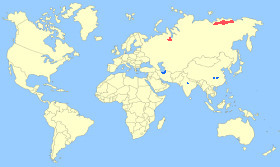 Notes: - The Siberian Crane is also known as the Siberian White Crane, and the Snow Crane. Unlike other Crane species they have a serrated beak, and their high-pitched call is more goose-like than the usual trumpeting call of other Cranes. The Siberian Crane is listed as 'Critical' on the IUCN Red List as numbers have rapidly declined due to hunting along their migration routes and habitat degradation.