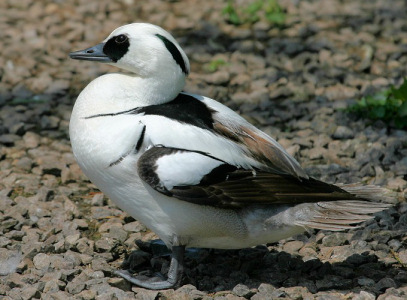 Appearance:
Male - The male Smew is mostly white with a black eye patch extending to the beak, a black patch at the base of the crest, a black mantle, a black rump, grey-black markings on the wings, and the legs and feet are greyish.
Female - The female has a brown chestnut head with white cheeks and throat, upperparts are a mottled grey, and breast, belly, and underparts are grey-white. Like the Mergansers, the Smew is a sawbill. The beak has a hooked tip and serrated edges which helps when catching fish.
Eclipse - The male in eclipse plumage is very similar to the female but retains more white on the wings.

Habitat/Range: - Lakes, ponds, and coast in Scandinavia, Russia, and Siberia. Winters on sheltered coasts or inland lakes of the Baltic Sea, northern Germany, the Low Countries, a small number to the UK, the Black Sea, China, Korea, and Japan. 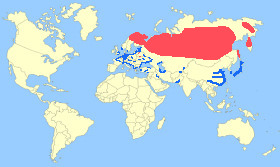 Breeding Season: - April and May.

Notes: - The Smew is a sea duck which has a sawbill and feeds mainly on fish and is closely related to the Mergansers (Mergus) and Goldeneyes (Bucephala). The drake has a distinct black and white colouring in flight which led to the nickname 'White nun'.