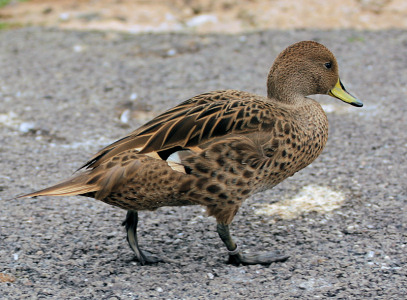 Appearance: - The South Georgian Pintail has a reddish crown, pale brown cheeks and throat, dark eyes, a yellow beak with a black line running down the middle and the tip, the back, breast and flanks are scalloped with buff, the underparts are a whitish-buff, dark-grey underwings and a pointed tail, and greenish-grey legs and feet. The female is similar except the male has brownish-grey upperwing coverts with a glossy greenish-black speculum and the female has mottled upperwing coverts and a dull brown speculum.

Habitat/Range: - Freshwater pools, streams, and coastal areas in the subantarctic island of South Georgia and nearby small islands.

Notes: - The South Georgian Pintail is a sub-species of the Yellow-billed Pintail (Anas georgica). It is a dabbling duck endemic to South Georgia. Previously, when South Georgia was a whaling base, this duck was hunted and the population dropped considerably, but now with the abandonment of the whaling base, its numbers have recovered with a population of about 2000 ducks.