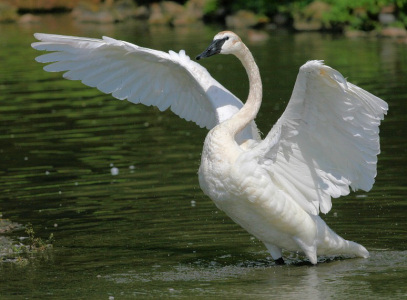 Appearance: - The Trumpeter Swan has a white plumage with a black beak marked with salmon-pink along the mouth-line, the black extends from the beak to the front of the eye, the feet are usually a grey-black. The female (Pen) closely resembles the male (Cob) but is slightly smaller. The Trumpeter Swan looks similar to the Whistling Swan as both are white with a black beak and legs but the Whistling Swan is slightly smaller, has a different shaped beak and usually has a small yellow patch in front of the eye.

Food: - Mainly aquatic plants, duckweed, pondweed, but will also graze in crop fields. They will also eat animal matter such as insect larvae, worms, and molluscs.

Habitat/Range: - Lakes, rivers, ponds in north west and central North America:- mainly Alaska, and Canada and they migrate to the Pacific coast. Notes: - The Trumpeter Swan was heavily hunted for food and also their feathers in the 19th and early 20th century causing a severe decline in their numbers. However, they have now increased rapidly in population due to protection. One of the best ways to identify a Trumpeter Swan is by its deep trumpet-like call. The Trumpeter Swan is the heaviest living bird native to North America and is the American counterpart and a close relative of the Eurasian Whooper Swan.