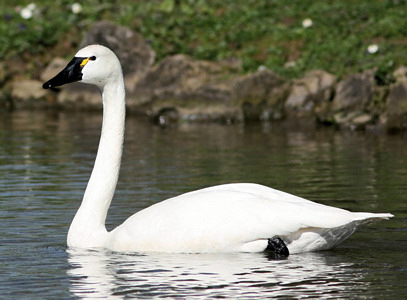 Appearance: - The Whistling Swan is similar to the larger Trumpeter Swan and has a white plumage, a black beak with a salmon-pink streak along the mouthline and variable amounts of yellow at the base of the beak which may be lacking, dark-brown eyes, and the legs and feet are black. The female (Pen) is similar to the male (Cob) but is usually slightly smaller.

Food: - Mainly aquatic plants, leaves, roots stems, but will also graze on grasses, and grain. They will also eat animal matter such as aquatic insects, larvae, and freshwater molluscs.

Habitat/Range: - Lakes, marshes, estuaries in the Arctic tundra region of coastal Alaska, and northern Canada. Winters down the Pacific coast to mid-California, and down Atlantic coast from Maryland to South Carolina, also in the Great Lakes. 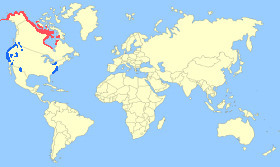